Ok, right off the bat you might ask: What the heck is a Magic Mirror?

The answer couldn't be simpler: It is a mirror that has more capabilities than a simple mirror, which you may use as a mirror, but might have more information than the reflected image from yourself.

The concept I think it is difficult to say where it came from, but several articles have popped up on the Internet in the past years and although I was dismissive for a while, some day it knocked me the idea that I could also build one and that was what I just did.

For me, the more convincing inspiration came from this article (and consequently its links): Magic Mirror Projects on Raspberry PI website

From there I could visualize how I could also build mine.

So initially, but not on this order, I've built a wood frame that would fit the monitor and the mirror.

The concern here is to have enough slack for the cables, power socket and the HDMI adapter I'm using, because the monitor doesn't have a proper HDMI.

I decided with my wife that we could really do it vertically, so it will really resemble a mirror, or a regular frame hanging on the wall, although a little bit more bulky. 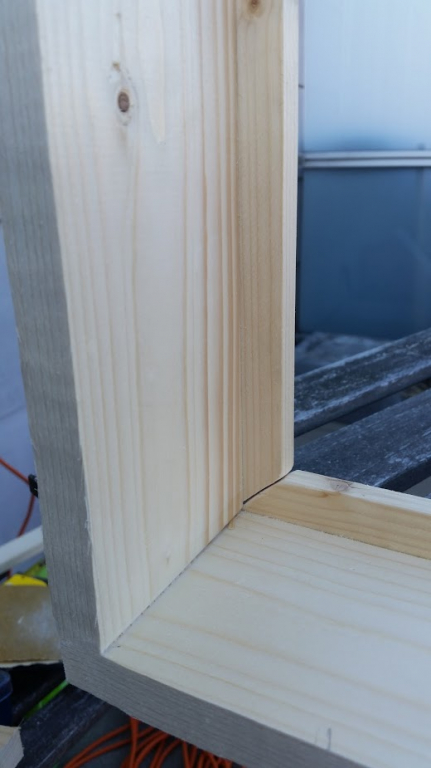 Another thought was how to fix the monitor in a vertical position along with the "mirror" in front of it? One thing was to create a small front holder, as a frame adornment, which will also work to hold the monitor and mirror in place.

Theafter came when fitting it, four pieces of metal corners as detailed in a picture below.

The imperfections and the gaps created by the "rough" wood work, like screw heads, fittings of the front frame were compensated with Alabaster, the actual material used to cover / fill holes in walls. Using this, the final product is more smooth and free of markings (if done correctly). 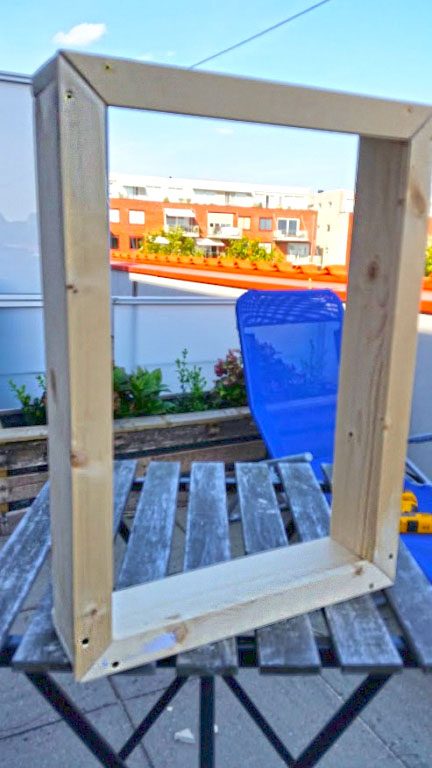 I actually failed in properly document the whole project, as I was more focused into build something that would work accordingly.

But even the picture with the whole frame out of focus, I think it is reasonable to have an idea about the overall result.

While the wood product was taking shape, I was also working in the software part of the project.

The main idea is to use an Raspberry PI version 2 I had sitting around the house, which connected to a dedicated monitor via HDMI, would boot and automatically login to a user and run some browser in kiosk mode.

This browser would then connect to a local webserver on the RPi providing the MagicMirror2 software.

This part, for me at least, was not really difficult to achieve, the whole install was running in no time, probably I have spent something like 2 hours to make the whole process, including making the image of the RPi rotate and appear "vertically" on the monitor.

What took way more time was to run tests of modules, customize to our preferences and obviously hack our way out to something that would agree with all tastes in the house. 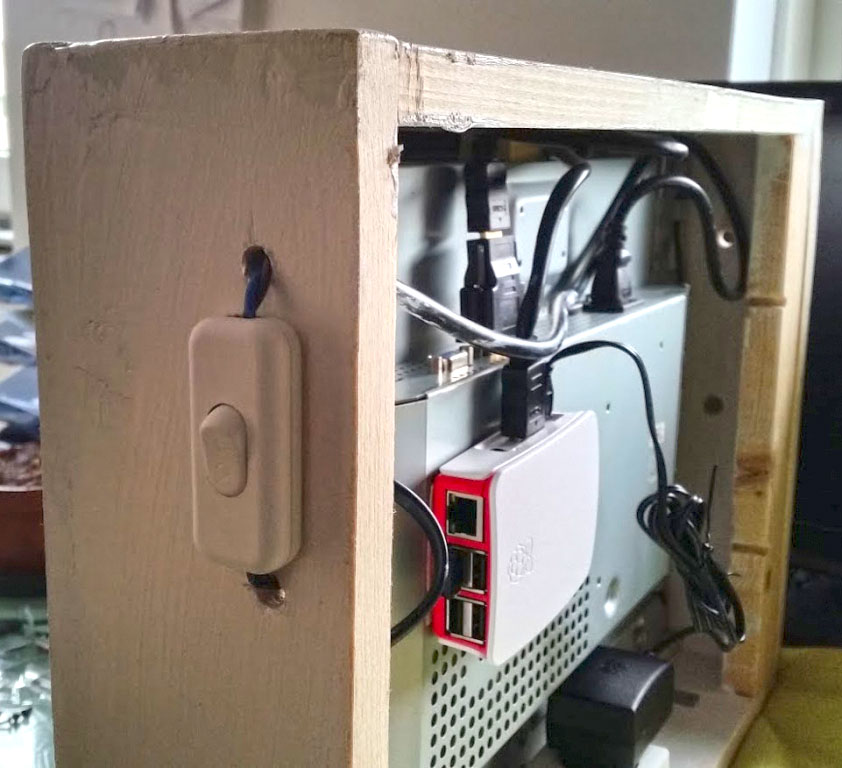 I actually came up with the idea of adding an switch for the monitor only.

So at night we can turn him off while the RPi still running and updating the information. In the morning we don't need to wait him to boot or anything, it is just a matter of waking up the monitor.

We also go out a lot, and it makes no sens to keep it on all the freaking time.

Next to it, you can see the piece of metal corner to hold the monitor against the frame and some spacers to compensate the slack for the HDMI cable adapter. 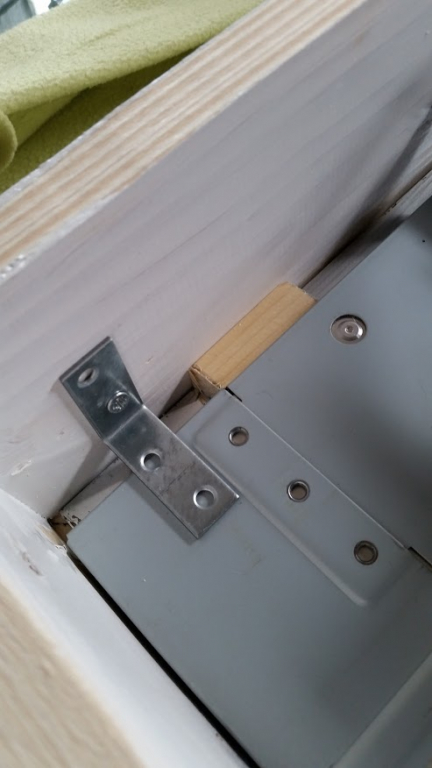 The internal fitting of it all, almost finished! 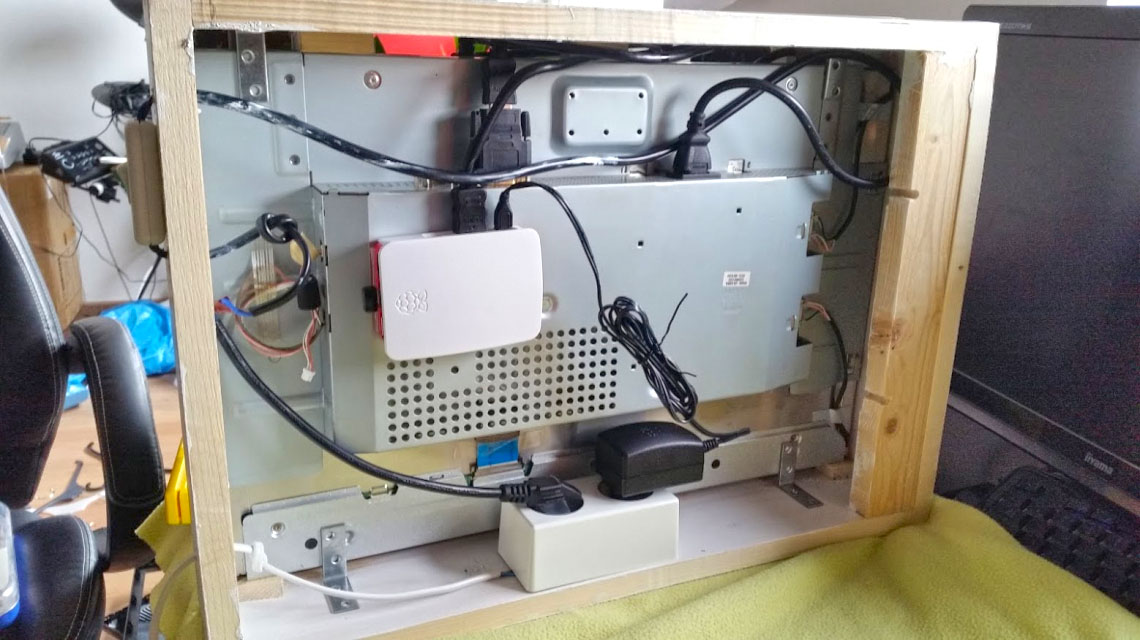 You may ask about the mirror, here is some information about it:

I bought a piece of acrylate with a mirror film above it, which work as a two way mirror, in dutch they call (Doorkijkspiegel) or confrontation mirror (Confrontatiespiegel).

I have chosen this one, because for me, it is not necessary to have a perfect mirror, but something that might work as a mirror as well. Besides this is way cheaper and safer than a glass mirror. The cost was about 38 Euros.

I bought via internet and the delivery was not perfect, but was sufficient to make use of the mirror. What happened is that they fixed the mirror against the cardboard with transparent tape, over the side the reflective mirror is, and it damaged a bit the corners, but the frame took care of hiding it. Acrylaat op Maat in Delft 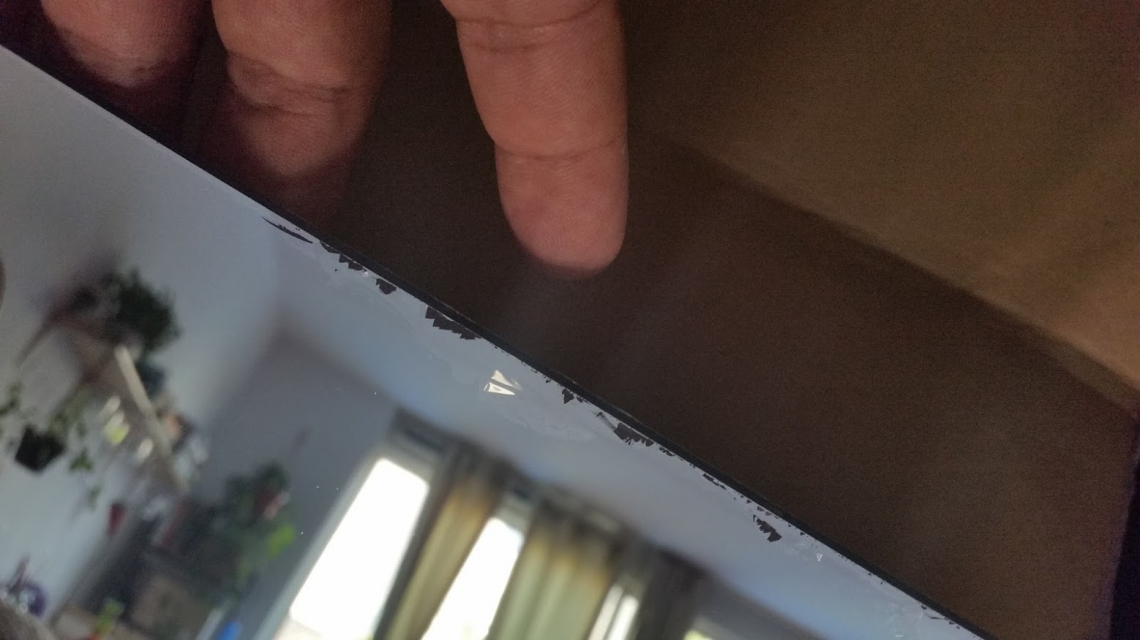 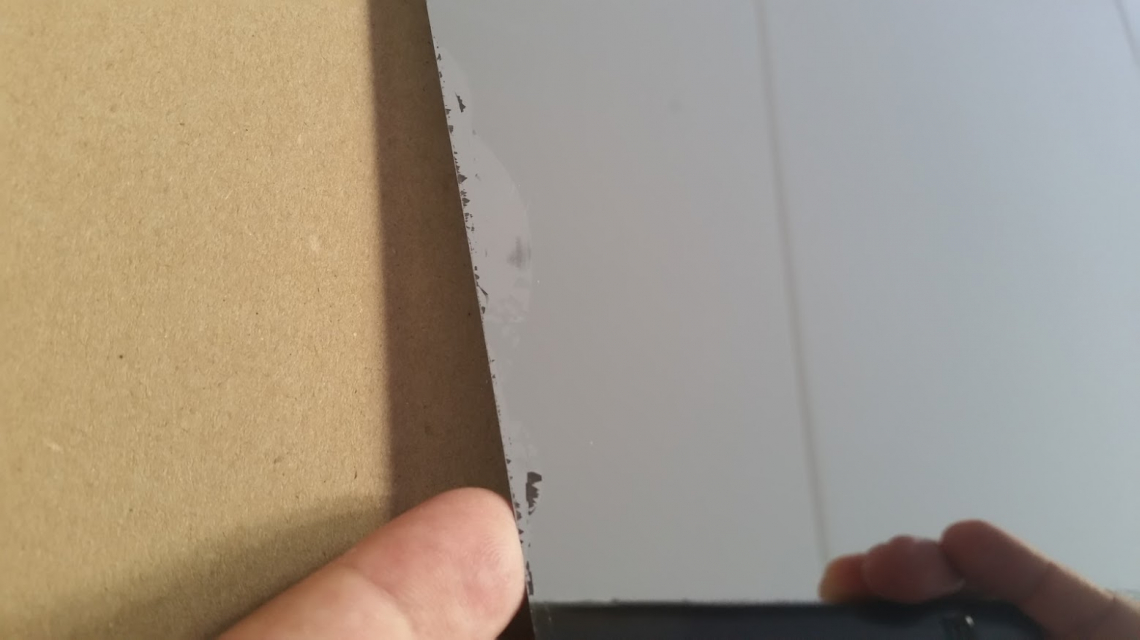 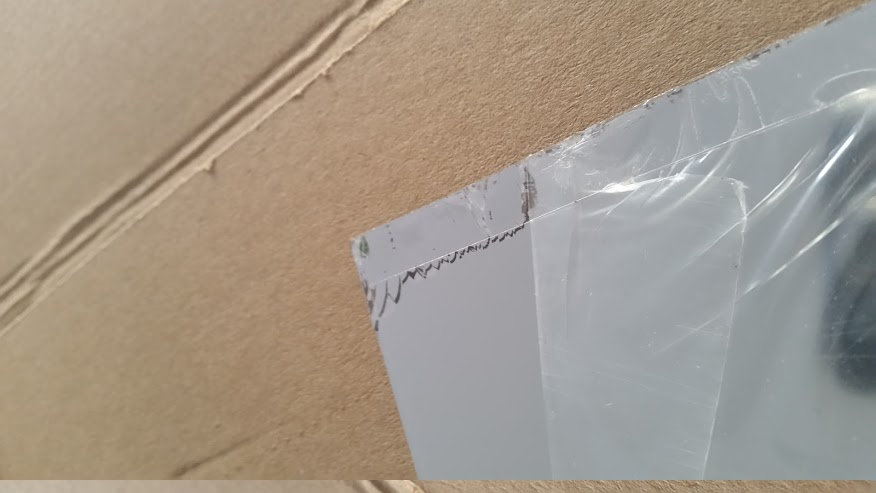 The final result hanging on the living room 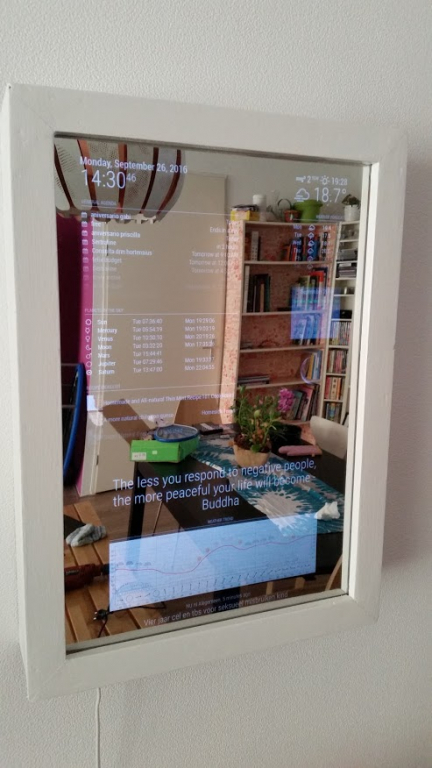 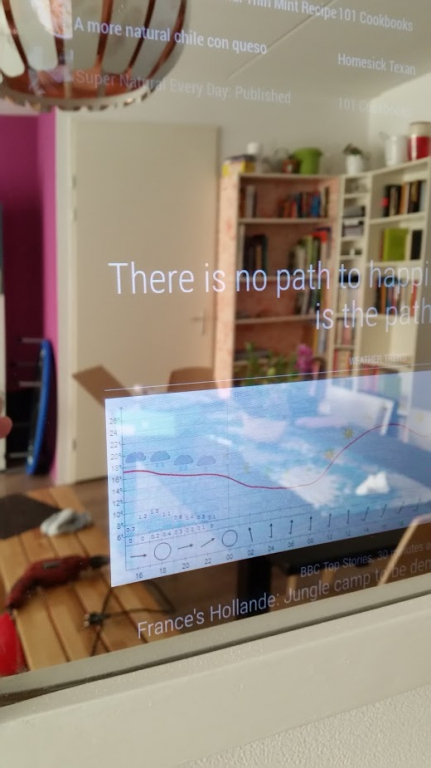 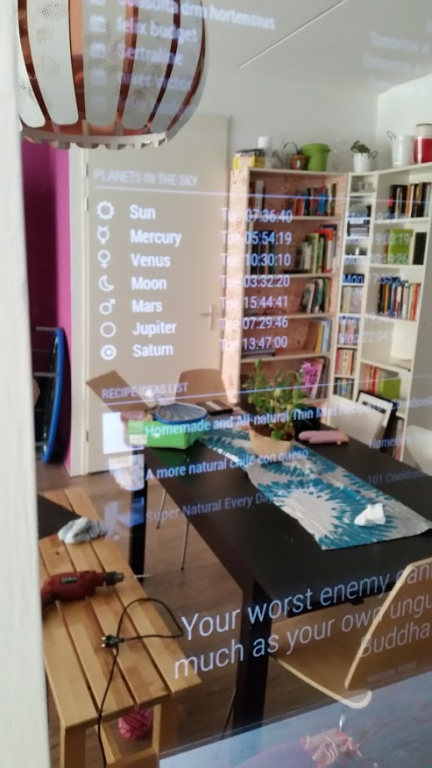